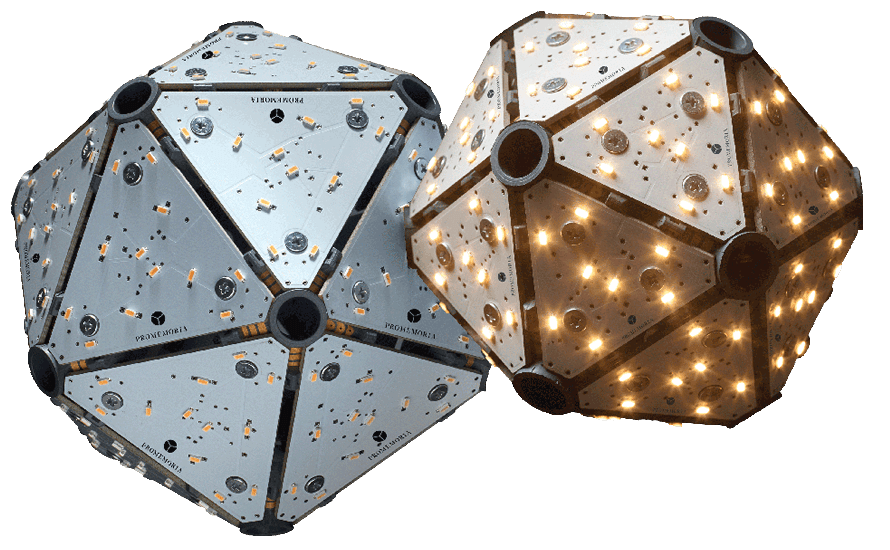 The starting point to create an object of beauty and harmony is usually, although not always, associated with traditions passed on through the centuries. In this case, the starting point was the golden ratio, or golden section whereby the ratio between two unequal lengths is the same as the ratio of their sum to the larger of the two.

ICOSAEDRO is a platonic solid with dihedral angles. It is made up of twenty equilateral triangles, which meet in fives at each apex. It has fifteen rotational axes of order two, ten of order three and six of order five, which together compose the icosahedric symmetry.

Each triangular side that composes ICOSAEDRO is a LED module containing 8 LED chips in the 50mm version and 12 LED chips in the 70mm version. The twelve vertices have an electrical connector which can transmit tension, current and regulating signals to the faces through their galvanised tracks; they also ensure a mechanical connection between the various elements of ICOSAEDRO. The galvanised tracks are on a plastic surface and made with an innovative method, molded in copper covered with a layer of gold so as to improve contact between the LED module and the connector as well as longevity.

The geometric form can be reproduced in its totality or partially by completing only some of the faces of the geometric solid according to the light required by each lamp. Thanks to its particular shape, ICOSAEDRO allows a 360° diffusion of the light spectrum, unlike all the other LED systems that are unidirectional.